This months post topic has been chosen by Emma of Read, Write, Inspire. The topic is Halloween, a fitting subject for October. Sam (Sam Alderson) and Kerry (Kerry May Makes) are sitting this one out due to hectic life schedules. Sam has been travelling and is now playing catch up with her blog. Kerry has been poorly but is getting better (yey!), however it’s caused a backlog with her other posts. We look forward to having them back when things level out again 🙂

I’ll admit it’s taken me a while to get this post sorted. We’ve also had a poorly household (time of the year) and unfortunately life gets in the way of preparing blog posts. I have a few lined up that I need to schedule so please bear with me. As this is a group post, it prompts me to write as regularly as I can.

So as I mentioned, the topic for this month is Halloween. This is normally a subject I have no problem with but I was struggling to pin down the right discussion for this post. I have other posts planned that ideally need to be in October but they didn’t feel right for the Bloggers Like Us series.

After a lot of debating I decided to go with craft and planning as it’s what brought us all together.

I knew I wanted to do some sort of drawing and originally was going to do a sketch of a haunted house in a location. This took me to Pinterest for inspiration. I searched “halloween journal pages” and typically of my pinterest, it offered up bullet journal pages. However I’m glad it did as it spun me in another direction. I still hadn’t prepared my week ahead in my bujo and as I’d been poorly Saturday night, I hadn’t done any jounal work either. This gave me a perfect opportunity to create a Halloween inspired weekly spread.

I started off by deciding that the layout would be over two pages. Then I went with a simple box layout for the days of the week and notes, this gave me plenty of room to draw and paint around them. I roughly sketched out the boxes and sat for a minute to see what would work on the page. From looking on pinterest, I knew I predominantly wanted to work with black, orange and yellow. I had a nice gap between the pages so decided to draw a tree branching out across the whole page. Then I added some pumpkins to the bottom and a moon in the top right corner. Unfortunately I didn’t get an early picture with only the pencil.

Once I had the initial design, I started to add colour. I started off with some Derwent Inktense blocks using them almost like watercolours. They can be really heavy on colour so I had to make sure I had plenty of water. I started with the pumpkins adding a little orange. I then added yellow near the tree and blended this to orange across the page. I then used a mixture of blue and purple for the moon but again really watered this down so that it almost looks like an orb. Lastly I added a pale brown the the boxes themselves to give them a worn look. At this point I decided to leave it to dry whilst catching up on a few other things. 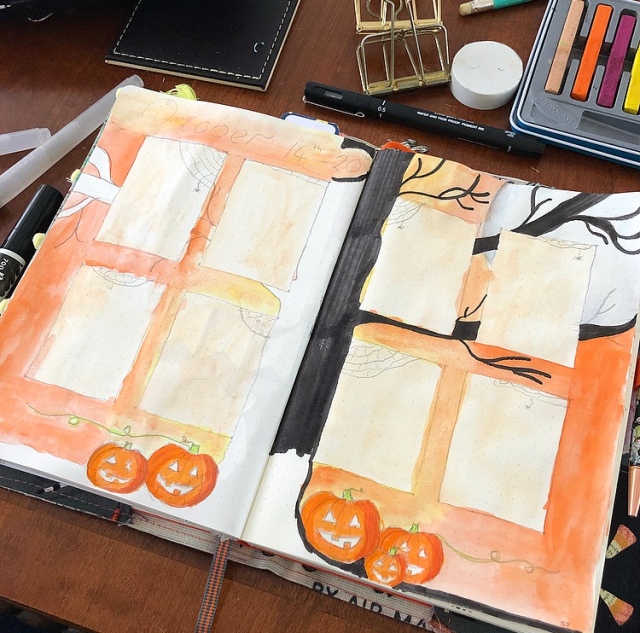 Once dry, I decided to add in the black and go from there. For this I used an Ecoline brush pen, it’s a fat brush pen and I thought a little would go a long way. It goes on really dark however when it dries you can see the lines from the pen. I expected this and it doesn’t offend me. I could have gone over it again or worked in a black paint but apart from not being too fussed about it, I also had to consider that the pages ghost in a Leuchtturm. If I added too much I imagine it would start to leak through. Once all of the black areas had been filled in, I used a mixture of brush pens to add further colour to the pumpkins and their vines.

Once I had all of the colour added to the page and was happy, I decided to go in with some pen work. I started with a Uni-ball Fineline Pin in a weight of 0.5. With this I added any extra lines where I felt a bit if definition was needed, the pumpkin lines and faces, the vines, the box edges, the cobwebs and spiders, the edge of the moon and some more branches. The last details to add were the greyed out corners of the boxes with a Derwent Graphik pen in 0.5 and the days of the week.

I haven’t done a planner spread like this for a good while, this is mostly because I need to set time aside for it. The benefit was that I was able to get the kids involved, they sat drawing with me when I did the prep work. I like to do it when I can and it adds a whole new level to your bullet journal. It’s also now has me more in the mood for Halloween!